A few weeks ago, I had a life-changing experience. OK, maybe just kitchen-changing. Either way… my friend Bethany started experimenting with browned butter, and, well, let’s just say that I am going to BROWN BUTTER ALL THE THINGS. Seriously. She made two batches of butter pecan cookies (one with browned butter and one without), and the flavor difference was amazing. And then we got together and made brown butter cupcakes, and from there, things have been spiraling out of control. I made brown butter rice krispie treats (another Smitten Kitchen win). I got irrationally excited when we accidentally browned the butter for some scrambled eggs.

Like I said, it’s out of control. Once you brown butter something, you’ll never go back. (I’m even starting to ponder the idea of brown butter ice cream….)

When I ended up with lots of extra rhubarb compote, I decided to turn it into cupcake filling, and naturally, I went with the brown butter cupcake. I thought it would go well with both the rhubarb filling and the cream cheese frosting. The brown butter batter is so great; it’s actually a shame to bake it, as the flavor after baking isn’t nearly as prominent. I’m still trying to figure out a way to fix that. Until then, I’ll just settle for licking the beater while the cupcakes are in the oven. 😀

A couple notes about these cupcakes: Annie’s recipe says that the recipe makes about 28 cupcakes. I must have under-filled mine or something, because I got 24 full-sized cupcakes and 24 mini cupcakes out of one batch of batter. The first time Bethany and I made the cupcakes, we got about 28 out of the batch. If you wind up with about two dozen cupcakes, one batch of frosting should be enough. (I raided my “extra frosting” stash in the freezer to take care of my extras.) 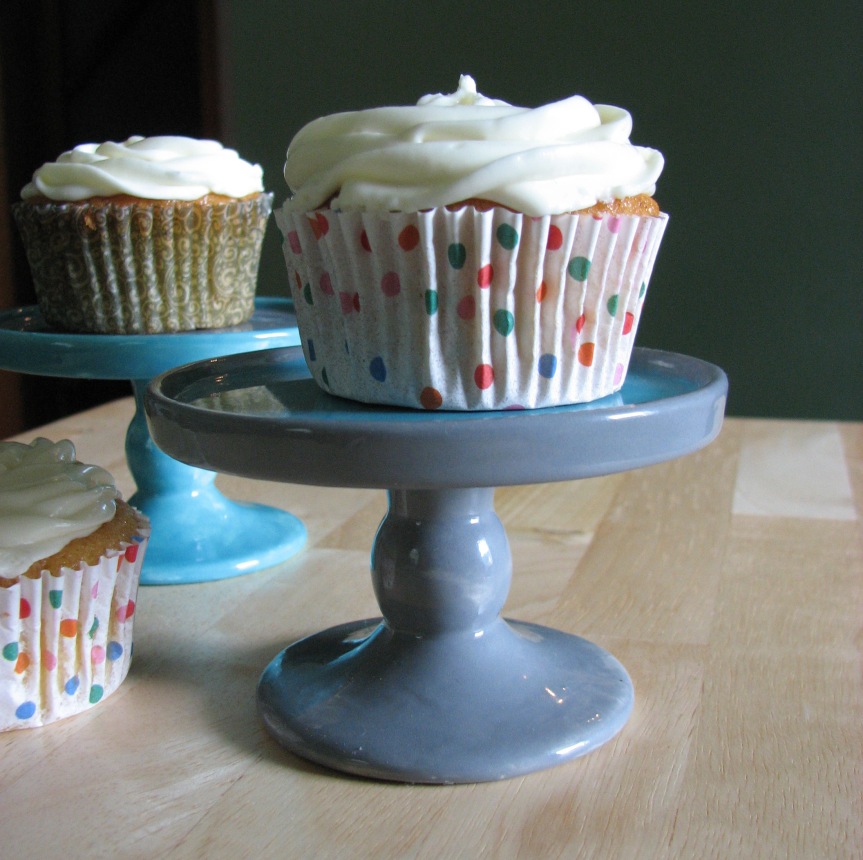 For the cupcakes:
2 sticks of unsalted butter
1 cup sugar
1 cup light brown sugar, packed
3 cups of cake flour
1 tablespoon baking powder
1/2 teaspoon salt
5 eggs, at room temperature (I take the eggs out of the fridge when I start browning the butter.)
1 tablespoon vanilla
1 1/4 cups buttermilk, at room temperature
~ 3/4 cup of Rhubarb Compote (click over to the rhubarb ice cream sandwich post for the compote recipe)

To make the cupcakes, place the butter in a large skillet over medium-low heat. (Here are my brown butter tips. #1: Do not use a cast iron skillet – you won’t be able to see when the butter is brown. #2: Lower heat may take longer to brown, but it splatters SIGNIFICANTLY less than a higher heat, and I’d rather wait an extra 5 minutes for brown butter than spend 10 minutes scrubbing the kitchen, but that’s just me.) Let the butter melt. Cook, swirling the pan occasionally, until the butter is a deep golden brown color and smells delicious. (Tip #3: DO NOT LEAVE THE BUTTER. It’s as needy as risotto. It’s also prone to burning if left unattended.) When the butter is browned, remove the pan from the burner and pour the butter into the bowl of your stand mixer. Allow the butter to cool slightly.

When the butter has cooled for a few minutes, add the sugars to the mixing bowl. Beat on medium speed until the mixture is smooth and the bowl is slightly warm to the touch.

While your mixture is beating, preheat your oven to 350 degrees and line the pans with cupcake liners. Set the prepared pans aside, and, then, in a medium bowl, whisk together the cake flour, baking powder and salt.

Beat the eggs into the butter/sugar mixture one at a time, scraping down the sides of the bowl as necessary. After mixing the last egg into the batter, add the vanilla and mix until combined. Reduce the mixer speed to low. Add the dry ingredients alternately with the buttermilk in three additions, beginning and ending with the dry ingredients. Mix until just incorporated.

Pour the batter into the prepared pans, filling them about two-thirds of the way full. Bake until the cupcakes test done with a toothpick, about 18 minutes. Remove from the oven. Allow the cupcakes to cool in the pans for a few minutes before removing to wire rack to cool completely.

To assemble the cupcakes, use a paring knife to cut a small cone out of the center of each cupcake. Fill each cupcake with a heaping teaspoon of rhubarb compote. (Leftover cake scraps and compote make an excellent snack for the cook… and the resident taste-tester.) Frost with cream cheese frosting. (I used a piping bag and the Wilton 1M tip.) Store frosted cupcakes in the refrigerator.

4 thoughts on “My Latest Obsession”