On one hand, I figured this was going to be good. After all, we’re talking about ice cream here. On the other hand, however, I was a little skeptical, especially since the recipe only had two cups of cream and 12 ounces of beer. Most of my other ice cream recipes have milk or half and half in addition to the cream, so I was afraid that I would end up with a tiny amount of ice cream. The beer must make up for the missing milk, since the final product filled my standard “ice cream” Pyrex container.

I loved the fact that, in spite of using six egg yolks, this recipe didn’t make you temper the eggs. Instead, you whisk the eggs, sugar and salt together and then cook them with the cream until thick and custard-like. Then, you simply pour the mixture through a fine mesh strainer to remove any egg pieces. Talk about a time-saver!

The recipe suggested two beers, neither of which matched up with what was in my fridge, but after consulting  Arron (the beer expert in my group of friends), I decided to use my last bottle of Stone Arch Vanilla Stout. (Of course, now that I’m looking it up online, I see that it’s only 4.7% ABV, and the recipe called for something between 8 and 11 percent. Whoops. It worked anyway.) The original recipe and article from America’s Test Kitchen has some good information about what beers to use, in case you can’t find Stone Arch vanilla stout. Most importantly, it said not to use anything too hoppy, as they will make the ice cream bitter.

Seriously, though, this was some good ice cream. It was smooth and creamy, and it didn’t melt nearly as fast as Andy’s favorite vanilla bean ice cream. The beer flavor wasn’t overpowering, and its coffee, vanilla and caramel undertones came through nicely. It went really well with a serving of hot fudge pudding cake (from Cook It In Cast Iron), and I really want to make another batch, just so I can sandwich it between some cookies. 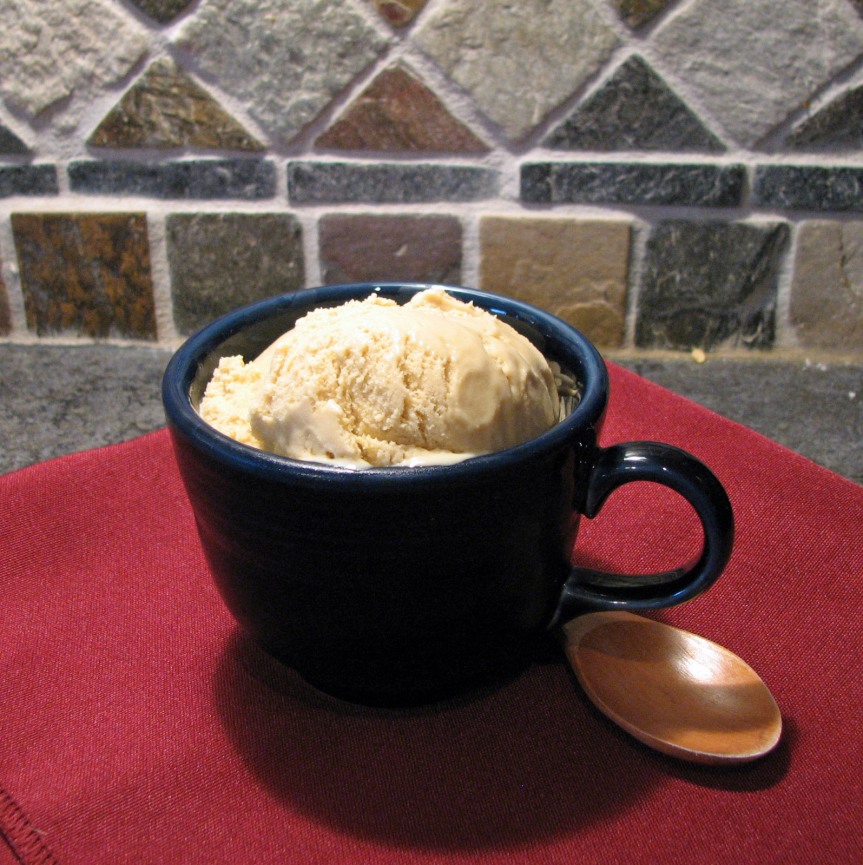 In a large saucepan, bring 5 ounces of the beer to a simmer over medium heat. Simmer until the beer is reduced to about half its original volume, lowering the heat as necessary to keep the foam level to a minimum.

Remove the beer from the heat and add the remaining 7 ounces of beer and vanilla to the mixture. Pour the beer-vanilla mixture into a bowl or Pyrex measuring cup and set aside.

In the now-empty saucepan, whisk together the sugar, salt and egg yolks. Whisk in the cream and cook the mixture over medium-low heat, whisking constantly, until it is thick and coats the back of a metal spoon (about 180° on an instant-read thermometer). Immediately remove it from the heat.

Place a fine-mesh strainer over an empty bowl (or a 2-quart Pyrex measuring cup) and pour the custard through the strainer. Whisk the beer mixture into the custard. Cover the ice cream base and refrigerate at least 8 hours or overnight. (Both ATK and Bridget said to place the bowl full of custard over an ice water bath to cool the mixture before placing it in the fridge. I skipped this step, mostly because I’m lazy like that.)

Rumor has it that this keeps in the freezer for 5 days. I couldn’t tell you, since we finished ours in one evening.

From The Way the Cookie Crumbles, who adapted it from America’s Test Kitchen

2 thoughts on “Not Your Average Ice Cream”