I did not grow up eating Hamburger Helper, or Tuna Helper, or any of those “add a pound of meat and enjoy” type meals. It just wasn’t something my mom bought. My dad did make his own version though, adding ground beef, onions and peas to mac and cheese. While I haven’t had that in a really long time, it was always a hit in our house growing up, and it’s easy to see why: cheese, pasta and meat, all in one pan.

Now that I’m responsible for making dinner every night, I can totally appreciate the convenience of a one-pot meal. Especially one that’s full of pasta and cheese. If I’m really on the ball with things, I can have all of the prep dishes (which are just a couple measuring cups / spoons, a cutting board, cheese grater and a knife) washed before dinner’s ready.

When I first saw this recipe, I thought it had a lot of potential. I mean, we love pasta, beef, cheese and Tex-Mex flavors. The sour cream and cream cheese worried Andy at first, but he was hooked after one bite, and now it’s one of our favorite comfort food dinners. Sometimes I take a page from my dad’s playbook and throw in frozen peas for a true, one-dish dinner. It’s also great with a side salad if peas in your Tex-Mex sounds weird to you. 😉 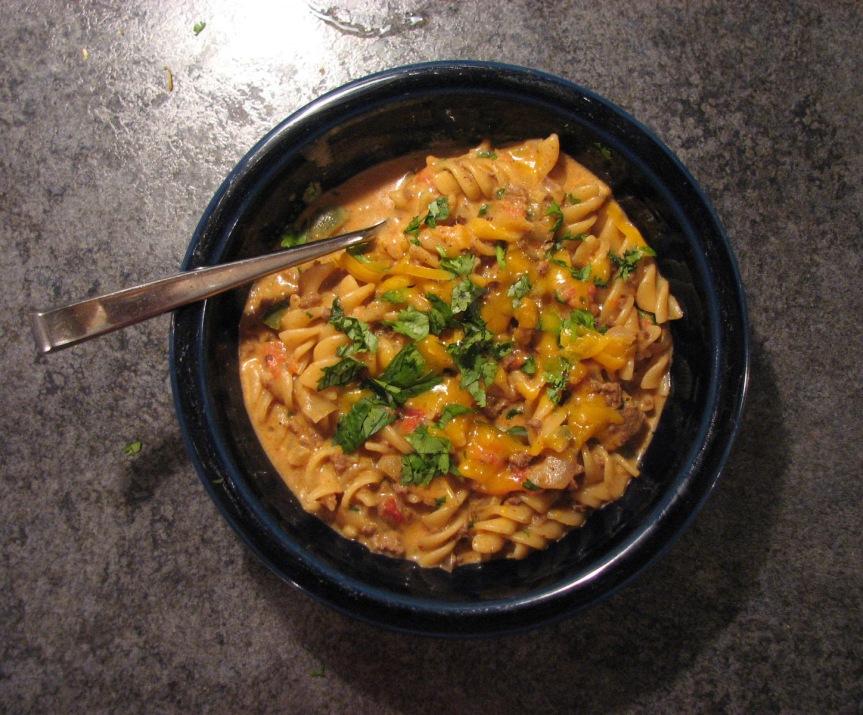 Brown the ground beef in a large Dutch oven over medium heat, stirring occasionally. When the meat is close to being browned, add the onion and chopped pepper. Cook until the onion had turned translucent. Drain any extra fat off of the pan, if necessary.

Add the diced tomatoes, taco seasoning and beef broth to the pan, scraping up any browned bits from the bottom of the pan. Bring the mixture to a boil and then stir in the pasta. Reduce the heat to low and cover the pan. Cook, stirring occasionally, until the pasta is tender (about 7-10 minutes).

Add the cream cheese to the pot and stir until it has melted into the broth. Add the peas, if using. Remove the pan from the heat and add the sour cream. Stir until the sour cream is well-incorporated. Taste and season with salt and pepper if necessary.

Ladle into bowls and garnish each serving with cheese and cilantro. Serve immediately.

Barely adapted from Elly Says Opa, who adapted it from Delish